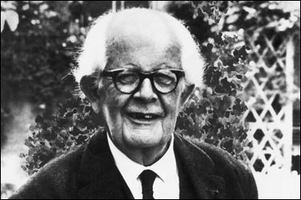 The Life of Jean Piaget

Jean Piaget was born on August 9, 1896, in French Switzerland. As a child, Jean was known as a prodigy. When he was only ten years old, he watched an albino sparrow. He then went to visit the library to learn more. He was treated like a child there. He didn't like that. After he wrote his first science paper, the librarian noted how smart he really was. By the time he was 21, he had written 20 papers. He earned an advanced degree in zoology/biology at the age of 22. Then he took an interest in psychoanalysis. When he moved to Switzerland, he heard the talks of Carl Jung. Then in Paris, he studied logic and abnormal psychology.

When working in Alfred Binet's lab, Piaget made some observations about children. He noticed that those of the same age made many of the same mistakes on true-false tests. He wanted to learn more about children's reasoning. So Piaget began to watch children. He did experiments. He observed them playing. He took lots of notes. He asked them questions, such as "What makes the wind?" He wrote down their answers. He saw patterns. For example, five-year-olds may not be able to give the correct answer to a question, but the answers made sense based on what a child would know at a certain age.