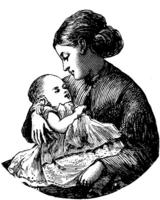 The Mystery of the Hidden Photograph, Part Two

Grandma seemed puzzled by the photograph, too. They went to the living room and sat down with Grandma on a large maroon sofa plumped with fat, embroidered pillows to study it more closely. Grandma grew quiet when she recognized that the picture was of Great Aunt Ella as a young woman. Grandma's brows knitted together as she thought.

Before Grandma could say anything, Cheryl felt an unusual chill in the air. Grandma felt it, too. Then something strange occurred. One of the photo albums on the shelf fell off for no reason at all and opened up! Cheryl and Grandma jumped up and peered at the page of old photographs, which were mostly of Great Uncle Floyd and Great Aunt Ella, not smiling as usual. However, there was a small rectangle where one picture was missing. Cheryl quickly realized that the space for the missing picture was the same size as the photograph of the woman and baby girl she had discovered in the basement!

"Grandma, do you think this picture belongs in this space here? It seems as though it would fit," said Cheryl as she placed the photograph on the page.

"Yes, dear, it does seem as though someone took it out. This is a picture of Great Aunt Ella when she was young, but I am not sure whose baby she is holding or why the picture was taken out. Ella and Floyd moved away for several years when they were first married, but this picture is a mystery to me. Maybe that was a friend's child, but then why would the picture end up in the basement wall?" said Grandma.

Grandma was very puzzled by several things. Who was the child? Why was the picture taken out of the album, and who put it in the basement wall? She was even more puzzled about why the album suddenly fell off the shelf as if it wanted to reclaim its lost picture.

"Ella and Floyd did come back to Ohio and started farming again. Floyd died about ten years ago, but Ella is still living in a nursing home in town. She doesn't talk much anymore, but I do like to visit her as often as I can. Would you like to go visit her while you are here?" said Grandma.

"Yes, let's go today!" said Cheryl. She had a feeling there was more to learn about the photograph, and she wanted to figure it out!

Brent came into the living room and wasn't too thrilled about visiting a nursing home. Cheryl convinced the eight-year-old that there might be some candy involved if he went along willingly.