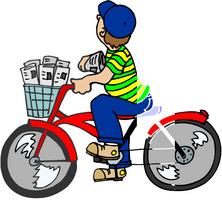 The Mystery of the Newspaper Bandit

"Oh, no. Yes, I will re-deliver the paper," Brian said with despair. The newspaper at 112 Rose Row had disappeared...again.

Ten-year-old Brian did not understand why one newspaper on his route kept disappearing. Each morning he woke up at the crack of dawn. He dragged himself out of his warm cocoon of blankets and got dressed. He then folded the newspapers that had been dropped off in his driveway and stuffed them into his satchel.

Off he went into the slowly-brightening morning. Brian thought of himself as the superhero of early morning information. He pedaled his bike through the sleeping neighborhoods and expertly shot his papers onto the dark porches and walkways. He had become such a good shot that his customers called him Bull's-eye Brian and gave him fantastic Christmas tips.

The tiny two story house was not unusual. It had a tidy lawn and incredible flower gardens. It was next to an open field, and sometimes Brian saw the dark silhouettes of deer munching on their breakfast in the early hours. A tiny stream meandered through the far side of the field, and fussy pheasants squawked from time to time. It was a peaceful spot in the midst of town, so why was the paper disappearing each day?

When Brian had been alerted each day of the missing paper, his father had driven him to the newspaper office to get an extra paper. Then they drove by 112 Rose Row to re-deliver it. Brian's dad was getting tired of his extra involvement in Brian's job.

"Brian, we need to solve this newspaper mystery. When you signed up to do this route, it was with the condition that you take responsibility for it, rain or shine. I know you have done a great job, and your customers are happy with you. But I am getting a little tired of helping you re-deliver a missing paper each morning," said Brian's dad.

"I know, Dad," said Brian. "I can't figure this out. I do deliver the paper every day, but then they call me and say that they didn't get it. I don't get it!"

"Well, what can we do about this problem?" asked Brian's dad.