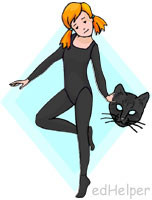 "Mom, I'm having trouble choosing a costume for Halloween," Cindy confessed. Cindy and her mom were carving a jack-o'-lantern for Halloween. They were scooping the seeds out of the pumpkin with big metal spoons, and it was a slimy mess. Spooky music filled the kitchen from Cindy's Halloween CD.

"Well, why don't you be a black cat like Sam?" said Mrs. Wallace.

"No, I don't want to be a cat," said Cindy as she patted Sam's shiny, black fur. Sam exploded in happy purrs. Cindy scooped more seeds out of the pumpkin with her spoon and put them on a tray.

"Why don't you be a fairy princess? You have some lovely sparkly dress-up clothes that would be perfect for that!" said Mrs. Wallace.

"How about a ghost?" said Mrs. Wallace.

"No," said Cindy. "Half of my fourth grade class will be ghosts. How boring!"

"Okay, then, what about a witch? A witch is a classic Halloween outfit. You have black tights, a black dress, and we can buy a pointy hat," said Mrs. Wallace, trying to be patient.

Mrs. Wallace sprinkled salt on the pumpkin seeds and popped the tray into the oven. She picked up Cindy's drawing of a pumpkin face.