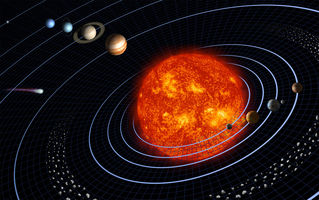 Our solar system is made up of mostly empty space. It contains the sun, the planets and their moons, and other bodies such as comets and asteroids. But each of these is much smaller than the space between them.

Our sun's planets are divided into two categories. There are the "rocky" planets and the "gas giant" planets. Rocky planets include Mercury, Venus, Earth, and Mars.

Mercury is the closest planet to the sun. It is difficult to see from Earth. Mercury is about one-third the size of Earth. It completes a trip around the sun every 88 (Earth) days. This makes it the fastest orbiting planet, moving at about 50 kilometers per second.

Mercury spins slowly on its axis, however. In two of its years (orbits) only three days pass! The length of one Mercury day is equal to about 58 Earth days.

The daytime temperature on Mercury can reach over 425 degrees Celsius (about 800 degrees F). There is very little atmosphere to absorb this heat, however. The nighttime temperature goes down to about -170 degrees C. This is the largest temperature difference of all the planets in our solar system.

The surface of Mercury looks almost like our Moon's surface. There are many craters caused by collisions with meteoroids and comets. There are some areas of smooth surface. In some places there are tall, sharp cliffs. Mercury's iron core has a radius of about 1800 kilometers. It is surrounded by an outer crust that is only about 100-300 kilometers thick.

Next in line is Venus. Venus is very similar to Earth. The two planets have about the same size and mass. But Venus has no ocean. It is covered with a thick mass of clouds. Because of these clouds, Venus suffers from an extreme "greenhouse effect." The clouds trap heat from the sun. This makes the surface temperature on Venus very hot (460 degrees C; 860 F). In fact, Venus is the hottest planet in our solar system even though Mercury is closer to the sun. The surface pressure is also very high.

Venus revolves around the sun once every 225 (Earth) days. It takes 243 Earth days for it to make one rotation on its axis. Venus spins in the opposite direction compared to Earth. If you lived on Venus, the sun would appear to rise in the west and set in the east!