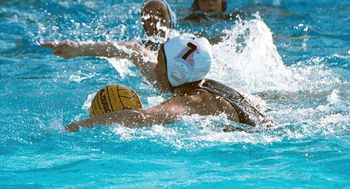 The Wild World of Water Polo

Many Olympic sports had crazy beginnings. Determined athletes refined these sports into Olympic gold. Water polo is no exception! This game had a murky, violent start. It has grown into a fun, fast-paced event.

Water polo began in England in the 19th century. The sport got its name from an inflated rubber ball. The early games used balls called "pulu" that came from India. Pulu was the Indian word for a ball. The English pronounced this word as "polo." This is how the sport became known as water polo. Since it also looked a bit like rugby, it was also called aquatic rugby.

Early water polo in England had different rules than modern games. To make a goal, players had to plant the ball at the end of the pool. They used both hands. They tried hard to avoid the goalie because this ferocious individual could jump on any player who tried to score! Since the game was often played in rivers or lakes, the murky water hid a lot of wild activities.

Players fought viciously for the ball during these rough games. They even held each other down under the water. Players often passed out from lack of air. They floated unconscious to the surface, which made the game even more popular with fans who wanted thrills. Games seemed like huge submerged wrestling matches.

One unruly move was called the flying salmon, and this move didn't have anything to do with fish. The player with the ball jumped through the air from the backs of his teammates. This allowed him to sail over the heads of his opponents to score a goal. Players sometimes got up to fifteen feet into the air! Fans loved the flying salmon.