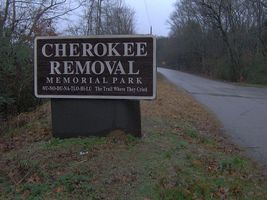 By the 1830s, gold was discovered in Georgia. New settlers poured into Georgia. The new settlers wanted the Cherokees to move. They wanted them to make way for white settlements. The U.S. government did nothing to protect the Cherokee Nation from attacks from these settlers. The tide was once again turning against the Cherokee people.

Andrew Jackson was elected president of the United States in 1828. He supported the state governors in their bid to rid their land of Native Americans. He wanted Congress to move the Five Civilized Tribes from the southeast and resettle them in Indian Territory west of the Mississippi. The Cherokee Nation was one of those five.

John Ross was the Principal Chief of the Cherokee Nation at that time. Although he was only half Cherokee, he was raised as a full-blooded Cherokee. He was well educated and respected. He was also determined to keep his people on their homeland.

Eleven days after President Jackson's speech to Congress about moving the Five Civilized Tribes, Georgia passed an Indian Code. The Code abolished Cherokee claims to self-government. It made Cherokee laws worthless. The state seized Cherokee gold fields and Native Americans were banned from removing gold from Georgia soil. Georgia placed strict controls on the Cherokees but did not protect them under Georgia law. Cherokees were forbidden to speak in court as well.