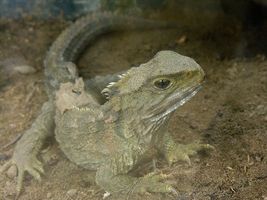 The tuatara is a reptile. They live only on the islands of New Zealand. Tuatara live in burrows in the ground. Their sharp claws are used for digging. They eat mostly insects and worms. They may also eat lizards, birds, and bird eggs. There are two tuatara species. They are the common tuatara and the Gunther's tuatara. Both have been protected since 1895. Loss of habitat is one reason these unusual reptiles are endangered. Another reason is that settlers brought new kinds of animals to the area. Cats and rats like to eat the tuatara and their eggs.

The name "tuatara" comes from the Maori people. They were the first people to live in New Zealand. Words from the Maori language are often used as the plural form as well as the singular. "Tuataras" is not often used; "tuatara" is most often used when speaking about one or many of the reptiles. Tuatara have loose skin covered with scales. They are grayish brown. They have pointed crests running down their necks, backs, and tails. In Maori, the word "tuatara" means "spiny back."