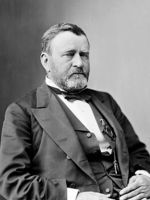 Grant was a great general during the Civil War. He led the Union Army to a victory over the South. Many thought that he would also make an excellent president.

Grant was elected president in 1868. By the day of the election, most Southern states were part of the Union again. African Americans were allowed to vote in the election. Most of them voted for Grant. He easily won the election.

He was an honest man, but that wasn't always the way that he acted when he was sworn into the office. He was given large presents from people who liked him. There were also many scandals.