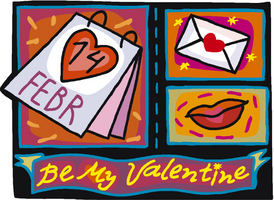 Do you have a valentine tradition? A tradition is a practice or custom that is done the same way year after year. Hundreds of years ago, the children in England had a Valentine's Day tradition of dressing up as adults and going from home to home singing songs.

Another Valentine's Day tradition involves twisting the stem off an apple. Think of five or six names of people that you like. Say the names of these people as you twist the stem. Supposedly, you will marry the person whose name you say as the stem falls off.