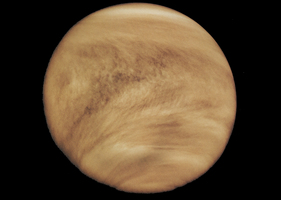 
Star light, star bright.
First star I see tonight.
I wish I may, I wish I might,
have the wish I wish tonight.

How many times have you said that little poem while wishing on a star? Chances are, the "star" you were wishing on was the planet Venus.

Often, Venus is the brightest light we see in the nighttime sky. Only the moon is brighter. But Venus is not a star; it doesn't make its own light. Venus and other planets only reflect light from the sun. Stars like our sun make their own light, as well as heat, by a process called nuclear fusion. Venus's thick clouds reflect the sunlight like a mirror.