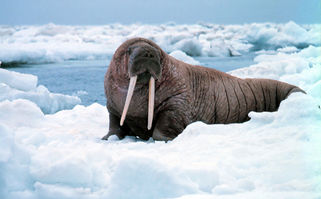 Wally sat on the edge of the sea ice. His massive body was the envy of all the smaller male walruses. He tilted his head back slightly so every other walrus could see how large his tusks were.

Wally was no longer a young walrus. His skin had changed from the dark brown color of youth to an almost pink shade.

His thick neck was covered with bumps called bosses. They made the skin appear rough.

Although Wally had little hair, he was not cold sitting on the ice. His skin and the thick layer of fat called blubber could be almost ten inches thick.

The old walrus's senses were still sharp. Whether it was the wind bringing a scent, or a tingling warning of experience, Wally suddenly tipped himself forward and dove into the cold Arctic Ocean.

Moments later, the crack of a rifle shot dropped a young male walrus on the ice. He had not seen Wally's hurried leap and had been caught in the Inuit hunter's crosshairs.

The other walruses woke to what had happened and slipped into the water to escape. Death was not new to them, but they did not choose to join the one now lying silently.

A few walruses watched the approaching hunter from a safe distance in the water. Wally had better things to do. Just below on the fairly shallow sea bottom were clams, thousands upon thousands of clams. They were his favorite meal.