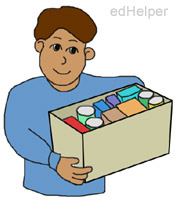 What Can I Do?

Marco watched his mother. She was putting cans of food in a box.

"This is National Food Bank Week," she said. "I am going to take some food to the food bank on the corner of Elm Street."

"A little bit," his mother said. "Sometimes people need help. They don't have enough money to buy food. They can go to the food bank. The people there will give them some food."

Marco thought about what his mother said. It made him sad. Everyone should have food.

He wanted to help. He didn't have any money. He was not old enough to have a job. How could he help?

He went in the kitchen. His mother had two big boxes of food.