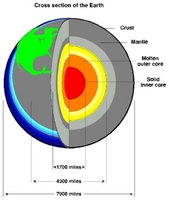 What Is Inside the Earth?

Long ago, people used to think the Earth was flat. They believed if they sailed a boat far out into the ocean, the boat would fall off the Earth! Now people know that this is not true. We know the Earth is not flat. It is shaped like a ball. The Earth only looks flat to us because it is so large. We can only see a small part of the Earth's surface when we are standing on it. Have you ever wondered what the Earth is like underneath the surface?