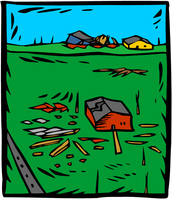 When a visitor stopped for something to eat at Ruby's Diner, if the visitor said, "Good morning," more often than not, Ruby would reply, "What's good about it? Look at the sky. We haven't had a cloudy day since 1958. The days are all the same. The place hasn't changed in forty years. Nothin' much good goin' on this morning nor any other morning in Whinytown, no siree!"

The visitor would quickly order a cup of coffee and be on his or her way. No one enjoyed being around whining, complaining people. It was true that nothing much had changed in Whinytown. That is, until "it" happened. "It" came in the form of a full-blown, all out hurricane.

It began on a Monday morning. The citizens of Whinytown were just waking up. The day began as usual until the first few drops of rain were felt. As the wind picked up, so did the rain. The people of Whinytown had no memories of the last storm because it was so long ago. They had forgotten and had begun to whine and complain about little things. Soon they were whining about everything. The sounds of wind and rain quickly stirred memories from the storm of '58.

People who were old enough to remember began nailing boards over windows. Word spread quickly that a hurricane was headed towards Whinytown. Within an hour, the rain was falling in torrents, and winds were blowing at gale force. The people were so busy working to protect their homes and families that they forgot their whining. Gallon containers were filled with water, and food supplies were gathered up and brought to the high school gymnasium. The townsfolk gathered in the safety of the gym to weather out the storm.

When it finally hit, the sounds of breaking glass, flapping boards, and crashing trees were deafening. They heard rushing water as the rain formed small rivers in the streets. An emergency generator had to be turned on when the electricity went out. The lights flickered in the gym as the storm outside raged.