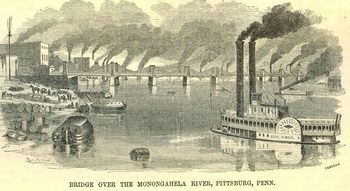 Most of the immigrants came from Germany, Ireland, and England in the 1870s and 1880s. But immigrants also came from other countries, like China.

There were only so many people in this country who could go to work. More immigration was needed so there would be more workers. A law passed in 1864 let employers and immigrants agree to a contract. The employer would pay for a person or a family to immigrate to this country. In return, the immigrants had to work for a certain time to pay back the money.