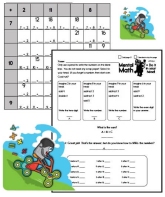 In the fourth grade, the math curriculum is focused on helping students develop understanding and fluency with multi-digit multiplication and division to find quotients involving multi-digit dividends. Students should develop an understanding of fraction equivalence and learn how to add and subtract fractions with like denominators and multiply fractions by whole numbers. Fourth graders will also learn that geometric shapes can be analyzed and classified based on their properties, such as symmetry, angles, and parallel or perpendicular sides.

These engrossing fourth-grade worksheets will take students far past basic skills in the four operations as they master numbers through the millions and six-digit problems of all kinds. Other captivating worksheets available here cover critical thinking, mean, median, and mode in unique ways for aspiring mathematicians. Students will also enjoy working on important topics such as percentages, ratios, fractions, complex money problems, and number theory. Create your own worksheets tailored to students in geometry, algebra, and more!

The Common Core Mathematics Standards for fourth grade state that students should: learn to use the four mathematical operations with whole numbers to solve problems; gain familiarity with factors and multiples; generate and analyze patterns; generalize place value understanding for multi-digit whole numbers; extend understanding of fraction equivalence and ordering; build fractions from unit fractions by applying and extending previously mastered math facts involving operations on whole numbers; understand decimal notation for fractions and compare decimal fractions; solve problems involving measurement and conversion of measurements from a larger unit to a smaller unit; represent and interpret data; understand concepts of angle and measuring angles; draw and identify lines and angles; classify shapes by properties of their lines and angles.

In fourth grade, students focus on multi-digit multiplication and division, learn to use larger numbers up to millions, and solve multi-step word problems that involve more than one operation. After a review of concepts they should already understand, such as addition, subtraction, patterns, and graphs, they'll begin studying fractions and decimals. Order of operations will be introduced, and students will solve complex word problems that involve money and change. They will learn to work with time, temperature, length, weight, and volume, solving problems that require them to use and convert between different units of measurement.

How will your fourth-grade students master these challenging new concepts? Practice is key! The worksheets listed on this page cover all the math your fourth-grade students need to know. They're quick and easy to print and can even be customized if needed. These captivating fourth-grade math worksheets will help students achieve mastery of the four operations with numbers up to the millions and develop critical thinking skills by working with percentages, ratios, fractions, number theory, and more. Teachers, take back your weekends with complete math workbooks to use in the fourth-grade classroom. No Prep. Not Boring!

Ordered Pairs and the Coordinate Plane

Have a suggestion or would like to leave feedback?
Leave your suggestions or comments about edHelper!