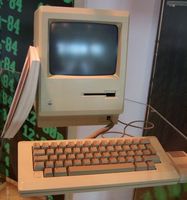 A Computer at Home

Take a look at your computer. Does it have graphics - and not just words - on the screen? Does it have a mouse? Is it small enough to fit on your desk? If the answer is "yes" to any of those, you can thank a computer first made way back in 1984 called the Apple Macintosh.

In 1984, computers were a lot different from what they are today. They were much bigger, much slower, and much harder to use. In fact, because they were so hard to use, most people didn't have a computer at home. At the time, computers were mostly meant for work. Apple wanted to change that.

The designers at Apple borrowed a lot of new technologies and built a computer with them. Rather than using just a keyboard and words on a screen to control a computer, Apple decided a computer should be controlled by a mouse. Apple designers added graphics. They also worked to make their computer much smaller than other computers in 1984.