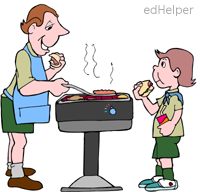 Reading Comprehension for May 28

Tony and I were leaders for our scout troop. It was Memorial Day weekend, and we were in charge of the cookout. I had hoped to serve something different from the standard hamburgers and hot dogs, but that's what all the kids wanted.

We had ten kids in our group, and they each would eat at least two hamburgers. We planned to buy two dozen hot dogs. The hamburgers would be about four ounces each, so I figured we'd need to buy 96 ounces so we could eat two also. Tony laughed at me when I was doing all the figuring, but I guess I'm just a nerd that way. He's more of a free spirit. I bought six pounds of ground beef.

"You are something else, Ben," Tony said. "Just buy eight pounds of meat!"

"Then we would have too much left over!" I said.

"So what! Freeze it for next time."

"I'm the buyer; you're the cook. Leave me alone," I said good-naturedly.

Once I bought the meat and supplies, Tony stored them. He had a larger cooler and could transfer the items more easily the day of the picnic. He can be a bit forgetful though, so on the day of the cookout I called to remind him.

"Do you have the hamburger meat and hot dogs?"