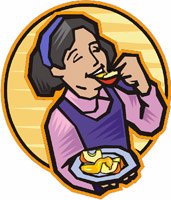 A Honey of a History

A Honey of a History

As long as people have been around, they have loved sweet things. Sugar has only been widely available for a few centuries. What was used to sweeten foods before that? The answer is honey.

Since the ancient civilizations, honey has held a special place in the lives of people. It was mentioned in ancient Sumerian and Babylonian texts written more than 4,000 years ago. It was also mentioned in writings from Egypt and India.

When the city of Jericho was founded about 11,000 years ago, honey was already a big part of the lives of the people. Archaeologists have found special storerooms that were used just for the storage of honey.

Throughout history in the Middle East, honey has been more than a sweet treat. It was also symbolic. During the Jewish holiday Rosh Hashanah, apples were dipped in honey to symbolize hopes for a year of sweetness. At other times, honey was an important part of meals, celebrating the sweetness of freedom and life.