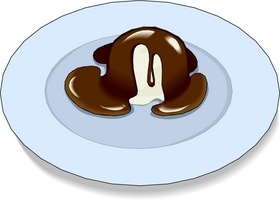 Austin really likes food. He likes vegetables, fruit, and meat. He likes pasta, bread, and cheese. He likes eggs, salads, and beans. He absolutely loves desserts. He likes almost everything, but he doesn't like mushrooms, olives, or Brussels sprouts. He absolutely hates squid. He thinks he might be a chef someday.

Austin's mother has been teaching him to cook. Last week they found a recipe for chocolate caramel ice cream sauce. It looked delicious! Yesterday Austin's mother decided to teach him how to make it.

Off to the grocery store they went. They took a shopping list so they would not forget anything they needed. They bought sugar, cream, vanilla extract, and chocolate chips. All those things were for the sauce. Then they bought a gallon of cherry vanilla ice cream. That was for the chocolate caramel sauce to cover!

Once at home, Austin helped his mom cook. They put the sugar in a saucepan. They heated the sugar on the stove until it melted and turned just a little bit brown. Austin had to stir it a lot.

Then Austin's mom added cream to the melted sugar. That meant even more stirring for Austin! It was really thick and hard to stir.