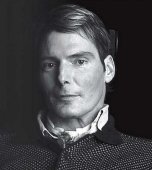 Christopher Reeve's story isn't a "rags to riches" tale. He was born September 25, 1952, in New York City. Reeve was raised in an upper middle class home. His mother, Barbara, was a journalist. Franklin, his father, was a writer and professor. His parents divorced when he was four. Still, the family didn't struggle to put food on the table. As a boy, Christopher went to big name schools. Even his prep school was Ivy League. (The Ivy League is a group of elite schools, the most respected in the U.S.)

From a young age, Reeve loved acting. He and brother Benjamin acted out their own stories. A favorite game was pirates with cardboard boxes as ships. "To us they became pirate ships simply because we said they were," Reeve said. Hanging on to that simple ability to pretend, he said, was an important part of being a good actor. He played several roles in children's theater. "Right from the beginning," Reeve said, "the theater was like home to me. It seemed to be what I did best. I never doubted that I belonged in it."

There was one place Reeve found he didn't belong. He'd played hockey all through his school years. His position was goalie. When he went to college, he tried out for the team. At that time, the Cornell "Big Red" were NCAA champs. At the first practice, the team lined up with Reeve at goal. Each man took his shot in turn, left to right. "Two or three [at a time] were coming at me," he said, "faster than I'd ever seen a puck come at me... I got absolutely shelled, and I thought, 'You know, I'm probably going to end up with no teeth.'" That day, Reeve ended his hockey career and opted for theater.

In his fourth year of college, he was accepted into a special program at Julliard, an elite school of the arts. Only one other person won a place in the program. It was a young man named Robin Williams. The two studied with film legend John Houseman. Williams and Reeve became good friends. Reeve went on to play many roles on the stage and screen. His first big role was as leading man to Katherine Hepburn in the play A Matter of Gravity. He got the part in 1975. Through the play's one year span, he formed a close friendship with Hepburn.

Reeve's 6 foot 4 inch frame and handsome face were assets in the film industry. In 1978, he won the part that would shape the rest of his life. He became Superman. Reeve molded his role into more than just a comic book fantasy. Cape and all, he made Superman a down-to-earth sort of guy. "[S]omebody that...you can invite home for dinner," Reeve said. "Someone you could introduce your parents to." What he wanted people to see wasn't just a man of power, but someone who had the character to handle power wisely.