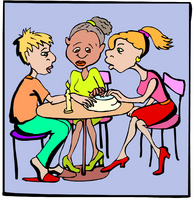 A Screeeech in the Night!

Twelve-year-old Morgan ran her finger across the star-studded cloth and smelled hot melting wax. Seances were silly! Then why did she feel so excited? Her stomach was jiggling like a bowl of Jell-O.

Sasha was having a sleepover for her birthday. Morgan and four other giggly girls arrived with their arsenal of sleeping bags, candy, makeup, and CDs. Each girl supplied a favorite treat. Morgan brought chewy red licorice, and as they passed treats around and listened to music, they noticed that it was finally getting dark. The pale moon peeked shyly through the basement window. As clouds drifted by, the room suddenly became purply-black. It was the perfect atmosphere for discovering whether ghosts were real!

Sasha had set up a card table with a rough tablecloth on it. The material was studded with stars and had a nubby texture. It looked like it had once belonged to a gypsy. A stubby yellow candle sat serenely in the middle of the table, holding its flame high like the torch of the Statue of Liberty. Fingers of liquid yellow wax crept onto the dish holding the candle. Morgan wondered whether they would actually contact spirits with this setup.

"We don't have a medium, so I am going to attempt to contact the spirit world myself," said Sasha with a grin. Sasha had just lost two molars, and the black gaps at the sides of her smile made her look a little bit more like a witch than she might have realized. The other girls nodded. After all, Sasha had read a book about seances just last week. She obviously was an expert on the invisible world. She also had more self-assurance than anyone else. The spirits would obviously prefer to contact her because of these abilities.

"How will you know when the spirits answer?" asked Hazel, a red-haired girl who looked like a fairy. She happened to be Sasha's best friend.

"Well, I don't exactly know," said Sasha. "The book said that the spirits could contact us in lots of different ways. We might hear furniture move. The wind might turn into a spirit voice. Or maybe, if we are lucky, we might see an apparition!"

Everyone gasped. What if they saw something?

Then mischievous Morgan had a terrible, wonderful idea. If the ghosts happened to be unavailable, she could certainly chip in and help. After all, Sasha and the other girls were looking forward to a little supernatural surprise. She grinned an elfish grin. She had a plan that would make pale Hazel even whiter with surprise!

Morgan had a simple, brilliant plan. When the girls closed their eyes and joined hands, Morgan would keep her hands free and let the two girls on either side of her join hands. She didn't consider that the other girls might sneak a peek. Then, she would use her fingernail on the underside of the card table to make a ghastly sound. She thought that a scratch would be perfect, but a louder screech would be even better. She hoped that her fingernail would do the job and not break.