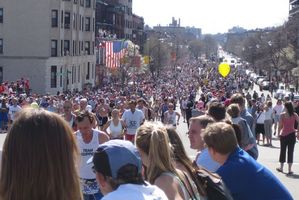 A Short History on Marathon

Have you ever run a marathon?

The marathon is a popular sports event. It is a long-distance foot race. To finish it, the runners have to cover a trek of 42.195 kilometers, or 26 miles 385 yards.

Nowadays, many big cities have their own annual marathons. Boston, for example, was the first in the world to have one on a regular basis. The city held its first race on Patriots' Day in 1897. At the time, only 18 people joined the race. But that number has been on a steady increase ever since. In recent years, the event attracted about 20,000 runners. (In the 100th running of the Boston Marathon, however, that number swelled to 38,000!) They came from all over the world. They joined the race not so much for the cash prize. Rather, they did it because they were honored to be part of this prestigious event.

Sure, the Boston Marathon is famous. It is extremely popular, too. But do you know who "invented" the marathon?