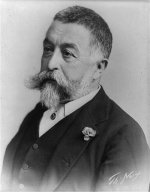 Many children like to draw. Notebooks and sketch pads become filled with realistic or fanciful pictures. Some young artists grow up to find jobs that pay them for their artwork. A few people become famous for such work. Thomas Nast fits that last category. His drawings influenced elections and army recruitment. He has been called the father of American cartooning.

Thomas Nast was born on September 27, 1840, in Germany. His family immigrated to New York City. A neighbor gave him some crayons, and young Thomas learned that he loved to draw. As a young teen, Nast was able to study art at an art school. By the age of fifteen, his family could no longer afford to pay for his school, so he went to work. He got a job with a newspaper as an artist! He was paid four dollars per week, but he was on his way to fame, doing what he loved best.

When Nast turned twenty-one, he paused to get married. Before long, he and his wife, Sarah, had five children - two boys and three girls. Nast also was fortunate to work as a political cartoonist for a well-known, national magazine -- Harper's Weekly. His cartoons appeared in that magazine from 1862 to 1886. He used his art to help the cause of the North in the Civil War, drive corrupt politicians out of office, and influence presidential races. His drawings of Uncle Sam (first drawn in the 1830s by Samuel Wilson) and the Democrat Party donkey (which dates back to 1837) made them popular and gave us the images we know today. He also came up with the Republican elephant. What is funny is that his use of the donkey and elephant was not complimentary, but the two political parties embraced them and continue to use them to this day!