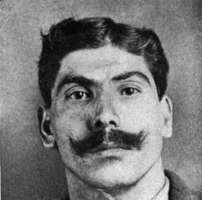 The year is 1871. Italy is one of the most overcrowded countries in Europe. It has become a unified nation. It now has a democratic constitution. Conditions should be improving. But they are not; they are getting worse.

Antonio is a peasant farmer in southern Italy. The land that he works is owned by a wealthy noble who lives in the north. The owner has not looked after the land properly. There is no irrigation. The soil is eroding because there have been no trees planted. No nutrients have been put back into the soil.

Antonio and his family are becoming poorer. There is disease all around them. Epidemics of cholera and malaria have claimed many of their friends. Antonio fears his family will be next. There is no medical care here.

The winters are short but very harsh. The small shack in which Antonio's family lives has no heat. Thankfully, they have made it through the winter. Now the summer is very hot. There is a drought. A disease has destroyed most of the grapevines. Antonio finds himself with no way to make a living.

Antonio and his family have no way to move up in society. There is a rigid class structure in Italy. Unless you are born a noble, you will always be poor. He and his children have had no education. Antonio's hard work does not pay off.