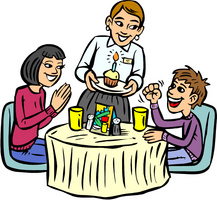 Appropriate Behavior When Eating Out

When eating out, people want to enjoy their meals. This means that more than just their food has to be good. Others eating around them have to remember to be considerate.

One thing people should not do at a table is talk on a cell phone. People who talk on a phone at the table are being rude to the people they are eating with. They are also being rude to the people around them. Some restaurants have rules against cell phones. Even if the restaurant doesn't have a rule about cell phones, you should turn yours off when you go in. If you don't want to turn it off, turn the ringer to vibrate. Then if you get a call, it won't bother other people eating in the restaurant. If you have to talk on a cell phone while in a restaurant, go outside. Remember to apologize to the people you are eating with before leaving. You should only take the call if it is very important or an emergency. Otherwise, you can call the person back after you are done eating.

Remember to talk in a quiet, calm voice while at the table. Restaurant tables are often close together. It is easy to listen to people sitting near you. If you want to talk about something private, you shouldn't do it in a restaurant. Don't raise your voice to another person at your table while eating. Again, it is easy for others to overhear you. If you raise your voice because you are angry, you either have to talk about the topic later or leave the restaurant. A loud fight in a restaurant is embarrassing for the people fighting and the people who hear it.