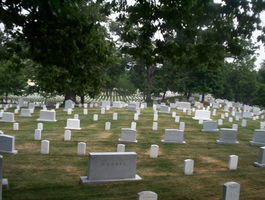 The land where Arlington National Cemetery is today was never meant to be a cemetery. The land first belonged to the family of George Washington. His adopted grandson was George Washington Parke Custis. He started a large house on the land in 1802. It was called Arlington House. Arlington was the name of a village in England where the Custis family had come from. George Custis and his wife lived in the house that he built for the rest of their lives.

The only child of George and his wife was Mary Anna. She married Robert E. Lee. He was the man who would eventually lead the Confederate Army during the Civil War. Despite what many people think, Lee never owned Arlington. The estate belonged to his wife. When she died, the estate was supposed to go to their oldest son.

Lee and Mary Anna lived in the house until 1861 when Virginia seceded from the Union. Lee was worried about his wife. He wrote her a letter and asked her to get ready to leave. In the house were many things that George Washington had owned or used. Lee urged his wife to take care of these things and then leave the house. Lee was sure the family would never live at the estate again. He told his wife to value the memories that they had of the place.