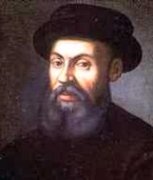 On September 20, 1519, Ferdinand Magellan set sail. He was setting out on an adventure. Magellan wanted to find a different route to the Spice Islands. The Spice Islands are in Indonesia. He wanted to be the first to sail west from Spain.

Magellan's first time at sea was when he was 25 years old. He sailed with an admiral from Portugal. When he returned, he began to plan his own trip. He asked the king of Portugal for help. The king said no. Magellan asked the king of Spain for help. He said he would help. Spain was looking for a different route to the Spice Islands in Asia.