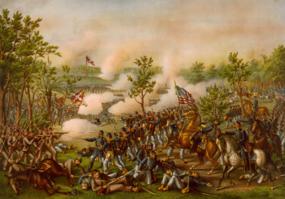 In 1864, General William Sherman started to move his army farther south toward Atlanta. This city was important to the South. If the North could capture this city, it would weaken the Confederate army.

Sherman moved south to attack Atlanta. He wanted the army to try to stop him. If the armies fought, Sherman was sure that he could destroy the Southern army. If no one could stop him, Sherman would take Atlanta.

Defending Atlanta was General Joseph Johnston. He knew that he did not have enough men or supplies to defeat Sherman. Instead, Johnston wanted to delay Sherman from reaching Atlanta. He hoped to hold him off until after November. Johnston was hoping Lincoln would lose reelection. He then hoped the new president would be willing to talk about peace and end the war.

Johnston tried as hard as he could. But the Union army kept forcing him back. By the middle of July, Sherman was only a few miles from Atlanta. The president of the South, Jefferson Davis, was not happy with Johnston's plan. He replaced Johnston with another general, James Hood.