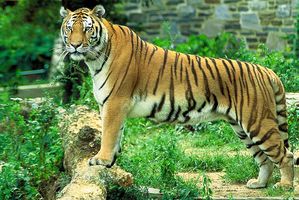 Tigers are mammals. Females give birth to litters of two to six babies. The mother tiger raises her babies without help from the male. Cubs learn to hunt when they are about a year and a half old. They stay with their mother until about three years of age.