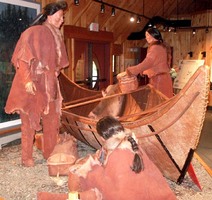 Beothuks: The Red People of Canada

Caption: photo from a Beothuk archaeological site near Gander/Twillingate, NF

The Beothuk were thought to have come to Newfoundland around 50 BC. They lived on the northeast and southern coasts of the island. The people hunted mainly seals and caribou. During winter snows the Beothuk used snowshoes. They also caught fish with spears and gathered the eggs of water birds. For centuries the people used stone knives, spears, and harpoons, along with bows and arrows in their daily life. It wasn't until after Europeans came that they learned about iron tools.