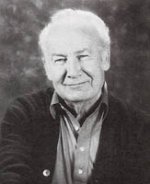 Doodling in class may get you in trouble. Bill Peet's teachers didn't approve of his artistic habit at all. Peet once said, "I drew for hours at a time just for the fun of it, and yet I was hoping to find some practical reason to draw for the rest of my life. But when I entered grade school, my drawing habit suddenly became a problem." However, Peet ended up getting an art scholarship and making a career out of drawing. Do you suppose any of his former teachers saved his doodles?

Bill Peet grew up in Indianapolis, Indiana. He was born during the first quarter of the 20th century. He told a story about his first trip to the zoo. He had saved his money for a camera. He hoped to take pictures of all the animals at the zoo. "I was clicking merrily away through the whole afternoon, never suspecting that the shutter wasn't working. Not a single one of the pictures turned out." After that, he started carrying pencils and sketch pads so that he could draw the animals. "Then if the picture didn't turn out," he explained, "I had only myself to blame!" If not for that camera problem, do you suppose Bill Peet might have grown up to shoot pictures for a living?

After he finished art school, he got a job working for Walt Disney Studios. Perhaps you've heard of it? The talented Peet spent 27 years on that job. He was an animator - a person who draws the cartoons - and a script writer as well. Peet's work went into such classic Disney films as Fantasia, The Jungle Book, and Alice in Wonderland. He also wrote the script for the cartoon version of 101 Dalmatians!