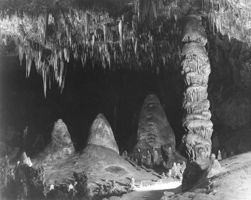 There is a large, famous cave system in New Mexico. This system is found in the Guadalupe Mountains. It is in the Chihuahuan Desert. More than 300 caves are below the surface. More than 100 of these caves are protected by a national park. The name of the park is Carlsbad Caverns National Park.

Native Americans knew of these caves for many years. Many others claim to have found the entrance to the caves. One young man usually gets credit for finding the entrance to Carlsbad Cavern. His name was Jim White. He explored it as a teen in 1898. He was a cowboy. He spent ten years describing the cave to people. He didn't have any proof of the cave's beauty. It was difficult to get people to appreciate the caves found here. Finally, some photographs were taken. More people explored Carlsbad Cavern. The cave was recognized as something special. It became a national park in 1930.