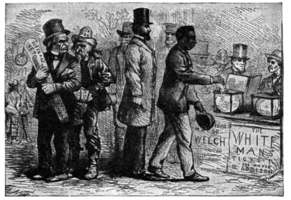 The South needed lot of help rebuilding at the end of the Civil War. Many people from different parts of the country went south. Some of these people went to help. Others went to take advantage of the people.

The people in the South thought of names for the people who came from the North. These names were not nice. They weren't meant to be. People were not happy with what was taking place.

People from the North who moved south were called carpetbaggers. A carpetbag was a type of suitcase. They were cheap to make. The makers would buy an old piece of carpet. The bag would be made from part of the carpet that was not worn out. A carpetbag could be bought for as little as a dollar.