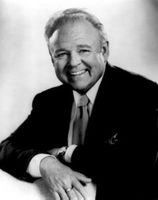 Great actors and actresses make you believe that they are the same as the characters that they play. One popular actor played his part so convincingly that he will always be remembered as "Archie Bunker." John Carroll O'Connor played the character of Archie in the famous television show, All in the Family. Americans loved his twinkling blue eyes and stodgy humor. In real life, however, Carroll was quite different from the bigoted blue-collar worker from Queens.

The only thing that Carroll O'Connor had in common with the character of Archie was that both of them lived for a time in New York. Carroll was born on August 2, 1924, in the Bronx, and grew up in Queens. He had two brothers, and his father was a successful attorney. Carroll's two brothers became doctors, but Carroll studied acting and literature. Carroll's family life was completely different from that of Archie's. Carroll's family was not prejudiced. His father's law firm had Jewish partners. Carroll was well-educated and cultured, while Archie seemed unpolished and crude.

The O'Connor family was of Irish descent, and Carroll earned an undergraduate degree from the National University of Ireland. He later earned his master's degree in education. He met and married his wife, Nancy, in Dublin in 1951. He appeared on stage in Europe in the 1950s. In between plays, he did substitute teaching to make ends meet. He had the opportunity to be in some films, but his big chance came in 1970.