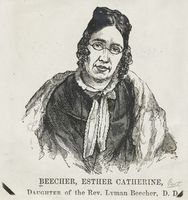 Catharine Beecher was born September 6, 1800, in New York. Catharine was the oldest of thirteen children. Early on, she learned at home. At the age of 9, her family moved to Connecticut. There she went to a private school. In 1821, she became a teacher. In 1823, Catharine founded the Hartford Female Seminary. This gave women a chance to pursue advanced schooling that had previously been available only to men. It was a success!

Beecher stressed that women were important to schools. She felt that a nation that was growing quickly desperately needed teachers. Many men were leaving teaching. Beecher believed that women needed to fill these openings. In 1829, Beecher wrote about the need for teacher training. She went as far as to claim teachers' jobs were more important to society than the jobs of lawyers or doctors.

In 1832, Beecher moved to Ohio. She started her second school there. In the Midwest, she pushed for more teachers and schools. She created other schools in Illinois and Iowa.