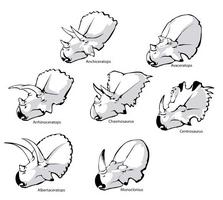 One group of plant eating dinosaurs are the ceratopsians (SER-uh-TOP-see-uns). This name means "horned faces." They had heavy bodies and walked on all four feet. This group is known for their huge horned heads.

These dinosaurs had a wide range of bony horns and neck frills. Their bodies were like that of the rhinoceros of today. The horns might be long or short. They might be straight or curved. The frill might be solid, or it might have holes in it. It could be spiky, scalloped, or knobbed.

Triceratops (try-SAIR-ah-tops) is one of the best known of this group. It was also the largest. The biggest ceratopsian was thirty feet long and weighed more than two elephants! Its skull was over six feet long - longer than most men are tall. It had three horns on its face. That's what the prefix "tri" in its name means.