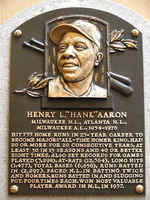 If you know anything about baseball, you have heard of Henry "Hank" Aaron. Every homerun hitter dreams of beating his record 755 homeruns during his professional career. He also holds the record for runs batted in (RBIs) at 2,297. He rounded 6,856 bases in his career. He was the first player to get more than 3,000 hits and 500 homeruns. Only Pete Rose and Ty Cobb have more hits than he got. How can one man hold so many records? Let's see if we can find out by looking at the childhood of Henry Aaron.

Henry was born on February 5, 1934. His full name at birth was Henry Louis Aaron. His father's name was Herbert Aaron. His mother's name was Estella Aaron. Henry was born in Mobile, Alabama. His parents would have eight children altogether. Henry was the third one born. Henry's parents wanted to live in a better neighborhood. The area in which he lived was called Down the Bay. When Henry was just a toddler, his parents moved to Toulminville, Alabama. This is where Henry grew up.

Henry learned baseball by playing with the neighborhood children. It was easy to see early on that Henry had talents that most of his playmates just dreamed about having. He loved to play neighborhood games. The more he played, the better he got.