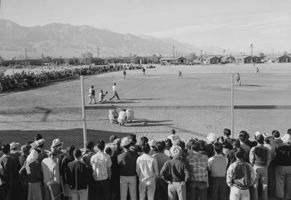 On December 7, 1941, everything changed for all Americans, especially those of Japanese descent. On that date, the Japanese army bombed Pearl Harbor in Hawaii.

Japan was already at war in Asia in 1937. It was the beginning of World War II. Two years later, Hitler invaded Poland. These actions split the global community. There were two sides: the Allies and the Axis powers. The major Axis powers included Japan, Italy, and Germany. The Allies were the Soviet Union, Great Britain, and eventually, the United States. The bombing of Pearl Harbor stunned all Americans. The following day, on December 8, 1941, President Franklin Roosevelt declared war on Japan.

There were about 120,000 Japanese Americans living on the West Coast at the time. Fear and mistrust began to take on a life of its own. Agents of the U.S. government came to the doors of Japanese American homes. They were searching for signs of loyalty to Japan. Children sometimes watched as innocent fathers were taken away even though they had committed no crimes.

In February of 1942, the President Roosevelt signed an executive order to round up all Americans of Japanese ancestry. All 120,000 Japanese Americans were to be sent to "relocation camps." These camps were spread out amongst seven states as well as Canada. The states were California, Idaho, Utah, Arizona, Wyoming, Colorado, and Arkansas.

Once a family received orders to "relocate," they had about seven days to pack their belongings. Each person was allowed to bring only two suitcases. Many children were instructed by their parents to wear as much as they could.

Families sold their businesses, homes, and furniture for pennies on the dollar. Others simply lost their homes and possessions. Pets were not allowed. Children could only watch as strangers took away their family pets.

Life in the relocation camps was difficult. Many of the first camps were constructed on racetracks or fairgrounds. A barbed wire fence surrounded each camp. Soldiers with guns watched from towers. These "relocated" Japanese Americans and their children were all prisoners. They could not leave.