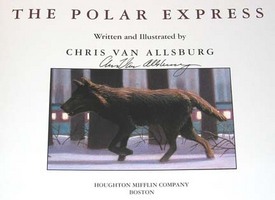 Chris Van Allsburg - He Does It All

Have you ever read The Polar Express? It is the story of a young boy lucky enough to take a train ride to the North Pole on Christmas Eve. If you look closely at the pictures in The Polar Express, you can learn a lot about the author of the book, Chris Van Allsburg.

Chris lived in a house that looked a lot like the house you see on the cover of The Polar Express. This house was in East Grand Rapids, Michigan. Chris was born in Grand Rapids on June 18, 1949. He had a sister waiting for him at home when he arrived. Chris's father and grandfather owned and operated the East End Creamery. It was there that they sold fresh milk, cream, cottage cheese, butter, and ice cream. His family lived right next to the creamery.

When Chris's grandfather started the business, it had been in the country. The creamery was surrounded by fields and trees. By the time Chris was born, the farmland was being overrun by new houses and other businesses. When Chris was three, his family moved to another house where they could still see trees and open fields. When Chris reached sixth grade, the new buildings had caught up to his family again. They moved to the house in East Grand Rapids you can see in his book. The streets had large, old elm trees growing between the sidewalks and streets on both sides. Each house was set back from the street the same distance. Chris loved living here with his family and two Siamese cats.

While in school, Chris studied his favorite subjects, math and science. His school emphasized high academic achievement. He wanted very much to be accepted into the University of Michigan. One day near the end of high school, the university sent an admissions officer to his school. Chris knew that if he and his grades could impress this man enough, he could be admitted to the university right there at the interview.

Chris was very nervous. He was called into his interview before he had had the chance to finish his admission form. The man asked him to finish the form by choosing the area that he wanted to study. Chris looked the form over. After asking a few questions, he did something that would change his life forever. He saw that there was a course of study called Architecture and Design. He found that this school would allow him to use his math and science skills and combine them with some art classes. He had never taken an art class in his whole school career. But he thought it sounded like fun.