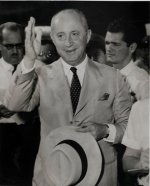 In the mid-twentieth century, Christian Dior was one of the world's most famous fashion designers. It was due to his designs that Paris regained her status as fashion capital of the world after the horrors of WWII. The Dior name is still well known half a century after his death!

Christian Dior was born in Normandy, France, in 1905. As a young adult, he served in the military, unsure of what to do with his life. He was talented at drawing. In 1935, he went to Paris to begin his career in fashion design. He was twenty years old.

Dior sketched designs for hats and dresses. His hat designs became popular. He didn't give up on the dress designs. After putting in three more years of hard work, his dress designs landed him a job in fashion design.