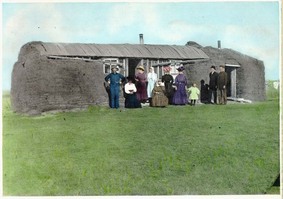 The lure of owning land is hard to ignore. After the Canadian Pacific Railway connected Canada's east and west in 1885, people began to flood into Canada. They all hoped to get a piece of land to call their own.

Travel cost a lot of money. To help with the cost, ships were subsidized by the government to bring the people to Canada. People from all over Europe went to these boats. Most people could not afford private cabins on the ships. Instead they traveled in steerage. There they were crammed with many others until the ship docked.

Once the ship docked, they went to an immigration station. After they were admitted into the country, they went to trains. The trains carried the people hundreds of miles. They rode until they reached the station closest to their new land.

Every ten miles the railway had sidings where small towns grew up. Most of the settlers were met at the towns by the Northwest Mounted Police. They were there to help the settlers get ready to go to their land.

Many of the people did not have a clue of what to do. They needed to be shown how to set up tents, ride horses, and drive wagons.

Once the people were off the trains, they found out where to go. Then they had to get there.