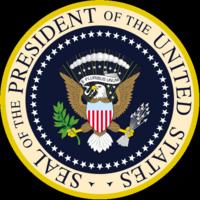 Two presidents, Washington and Madison, commanded troops in the field. Modern day presidents, however, leave that to the field commanders.

In the president's role as Commander-in-Chief, we see the system of checks and balances at work. Even though the president is leader of the military services, it is Congress that has the power to declare war. Also, the president is never a member of the armed services. He is its civilian leader. President Eisenhower, an army general, resigned from the army when he became president.

The role of Commander-in-Chief places awesome power and responsibility in the hands of each president.