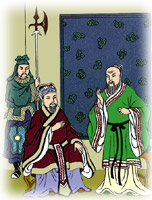 Many years ago, there lived a man in China who was unhappy with his surroundings. He didn't like the way his country was being ruled. This poor, unimportant man set out to change things. He traveled around his country, trying to convince rulers of a better way of life. This man died without success. His words and teachings lived much longer than he did. Today, this man named Confucius is at the head of a major Eastern philosophy called Confucianism.

According to legend, Confucius was born in 551 BC. At the time of his birth, his father was 70, and his mother just 15. Confucius's father died when he was just three years old. Confucius's mother was left to raise him alone. They were a very poor family.