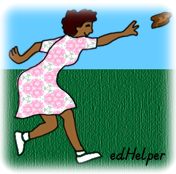 Roni Rae's mother had a secret. The smile that played around her lips hinted at it. The sly sideways glances toward Roni suggested it. Even her grip on the steering wheel implied it. What was her mother hiding? She refused to say.

Mrs. Rae wheeled the blue pick-up truck into the parking lot at the fairgrounds. The rocks under the tires made crunching sounds as she pulled to a stop beside a red, mud-spattered mini-van. "Come on, Roni, time's a-wasting!" she called as she leaped down from the driver's seat. She slammed the door and quickly re-tucked her sunny yellow T-shirt into her jeans.

Roni followed her mother through the gate and scanned the grounds for her favorite rides. She had just spied the Tilt-a-Whirl and the Zipper when her mother asked, "Roni, do you want to enter the pie-eating contest?"

Roni put her hands on her hips. "Do I look like I want to shove my face into a pie?" she asked. She was wearing a pink peasant blouse with designer jeans and a mood necklace with a silver cat on it.

After riding some rides, looking at some farm animals, and eating some lunch, Mrs. Rae led Roni to the pasture at the far end of the fairgrounds. "What's going on out here?" Roni asked.

"Eeew, gross," Roni said. She stuck her tongue out and made a gagging sound. "You don't really want to see that, do you, Mom?"