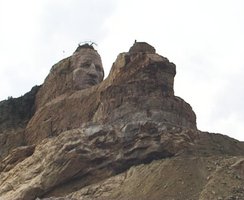 Crazy Horse was born in the 1840s. He was born along Rapid Creek in the area that would become South Dakota. His father was a medicine man who was also named Crazy Horse.

His mother died when he was young. His father then took her sister as a wife. This woman helped to raise Crazy Horse.