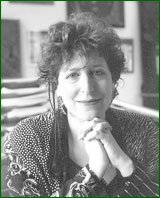 As Ellen Zolotow prepared to get married at age 16 (back in the days of hippies and flower children), her fiancé gave them both new first names. He chose Crescent for her and Crispin for himself. Both of them wanted a new last name as well. As she tells it, "One day, after trying and discarding several possibilities, I said, 'Maybe we're taking ourselves too seriously; maybe we should pick something completely frivolous.' He said, 'Like what?' I said, 'Oh, um, uh, like Dragonwagon.' If I had had any idea how many countless thousands of times I would have to explain this ridiculous name, I would have chosen something a lot less flashy."

Crescent Dragonwagon put her odd name to good use. She became an author! Not content to stick with one genre, she writes in six: children's books, adult novels, adult short fiction, nonfiction, poetry, and cookbooks.