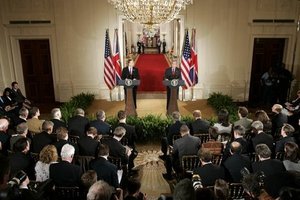 Dealing with the Press, One Part of the President's Job

Years ago, a president was elected. He went to Washington, D.C. He ran the country along with Congress and other people. Then, eventually, people around the country got the news of what been decided in Washington.

Today things are different. Now whenever the president or Congress makes a decision, anyone who is interested knows about it almost instantly. Even before a decision is made, news reporters are broadcasting clues as to what the decision will most likely be.

This has added one more important task to the president's busy job. That task is dealing with the press.