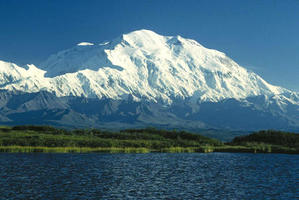 The Athabascan native people called it "Denali," meaning "the High One." We know it as Mount McKinley, the highest point in the United States. The Athabascans wandered all through the Alaska Range long before Europeans began to explore the region. Their nomadic bands hunted for caribou, sheep, and moose. They preserved berries, caught fish, and gathered plants. During the colder weather and snows of winter, they moved to lower areas in the river valleys for protection from the weather. These lands eventually became Denali National Park and Preserve.

Visitors to the park often want to see the "big five." They want see a moose, a caribou, Dall sheep, a wolf, and a grizzly bear. On a ride along a park road, they are likely to see all five in a single day!